In June 2017, Theatre Movement Bazaar was invited to take our production of Track 3 for a short tour in Russia. We performed at the Chekhov International Theatre Festival in Moscow, and Theatre Boff in St. Petersburg. To perform our adaptation of Chekov’s Three Sisters in his homeland was an incredible experience. (scroll down to see a few photos of the trip!)

I went to China to perform for a month. These photos do NOT do the experience justice, but since I haven’t gotten my act together to commemorate the trip properly, this will have to do. Thank you, Theatre Movement Bazaar and Tin House Productions for the amazing experience! 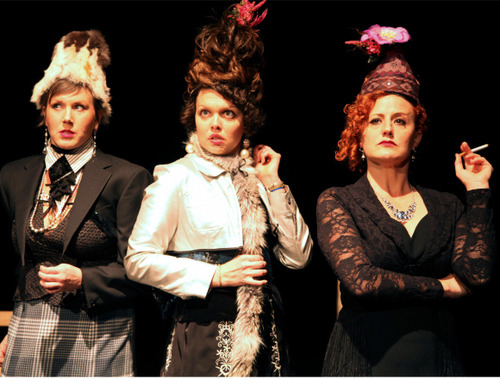 From our start at Bootleg Theater, to South Coast Rep, to Edinburgh Fringe, to Greenwich Theatre in London and back to Los Angeles for RADAR LA, Track 3 was loved. Here’s a round up of all of our reviews:

“Theatre Movement Bazaar’s "Track 3,” the L.A. troupe’s vaudevillian take on Chekhov’s "Three Sisters,“ thrived in this atmosphere, demonstrating to all lucky enough to catch this sprightly and sensitive riff at Los Angeles Theatre Center that its ensemble members are as disciplined and fearlessly original as any of the casts visiting from abroad.” – Los Angeles Times

“The performances are outstanding…This is a company worth both watching and supporting as its reputation spreads beyond Southern California.” – Huffington Post

“Mad, rad and dangerous to miss.  Track 3 is a glorious treat that is sure to bring a smile to the face.”  – Broadway Baby

Me, as the cast is busking on the Royal Mile. Courtesy of Liz Vital. #edfringe

We have now been in Edinburgh for almost three weeks, and have completed 14 of our 21 shows of Track 3. The festival is insane. There are almost 3,000 shows in town, and the population of Edinburgh increases by about 1,000,000 for the month of August. The city must have a massive hangover in September.

The Track 3 cast is housed in two different apartments; girls in one, boys in another. The girls have a charming apartment in South Edinburgh, on Bruntsfield Pl., which is littered with small boutiques, cafes and restaurants. I have taken to spending my mornings at Artisan Roast, a small cafe with amazing coffee and a comfortable atmosphere. It has become my little hideout.

The only downside to the neighborhood is the 1.5 miles from the theatre. This becomes a really long walk to do every single day, along with such a physical show; though there is a lovely route through an extraordinary little park.

The men in the show live about 5 minutes away from the theatre, right at Grassmarket, so the cast gets ready at their house around 2pm. Then we walk up to the Royal Mile to sing and pass out fliers for the show for about a half hour, before heading over to Bedlam Theatre to perform.

Bedlam Theatre is an amazing venue. It is a converted church, that serves as Edinburgh University’s theatre during the school year. During the festival, it is run by university students. Who make me feel really old. It is great to have a proper theatre, several venues are converted lecture halls, or conference rooms in hotels.

At the Bedlam, there are 10 shows that perform throughout the day, from 10:30am-Midnight. We perform every day at 4:25pm. We get into the theatre after the audience has cleared the show before ours, at about 4:05pm. We have approximately 10 minutes for “Get In” when we set our props and set pieces, check the speaker levels and drop gels into the lights for our design. The we run backstage, the audience is let in and we perform. At the end of the show, after our audience has cleared, we have 10 minutes for “Get Out” where we strike everything and get out for the show that is after us which begins at 5:45pm. Then we get notes from our director, head back to the boys house to change, and go on with our evening.

I haven’t done as much sight-seeing as I expected as of yet. I’ve walked a lot of the city, seen about 10 fringe shows and hiked Arthur’s Seat. My ambitions for this trip seem to continually get waylaid by the need to eat or sleep. My first priority is maintaining my energy and health for the show. Everything else has to come second, but I can’t help but feel like I’m missing out. I wouldn’t trade this experience for anything, though. What an adventure. 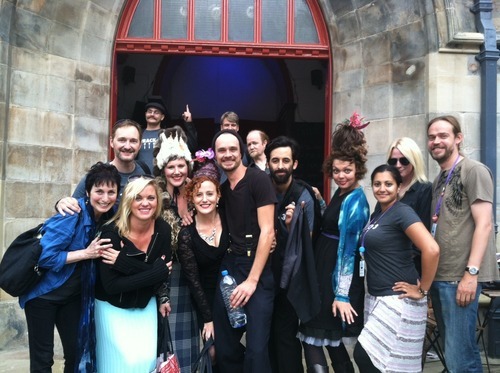 We’re on the cover!

Photos from our first days of #edfringe

First Time at the Fringe? A Rookie’s Guide to the Edinburgh Festival

The programme’s already been released, the comedians have long had their promotional photos ready, and now the countdown to the Edinburgh Fringe Festival well and truly begins. 2013 will be my fifth year as a punter and I’ve already scoured the listings to seek out some early ideas for what to see when I visit.

I’m studying up and getting ready!